Last week I attended SAP TechEd in Barcelona. As a strategic partner of SAP, Solace had a booth where I had set up an Internet of Things demo. It consisted of a toy train carrying a sensor which collected information about temperature, direction and speed, and sent the data to a Raspberry Pi via Bluebooth. The Raspberry Pi in turn published this information to a topic in a Solace appliance in London using the MQTT protocol. A consumer represented by a Java program deployed locally on my Macbook in Barcelona subscribed to the topic and provisioned an influx database, which was used by a Grafana Dashboard to display the sensor information.

Here is the architecture of the demo:

This simple demo illustrated the ability of Solace to easily provide a pub/sub architecture that’s robust, scalable and highly available. On top of this, Solace serving as the messaging back-bone of SAP Hana Cloud Platform was another real life example of the reliability of our solution, being used already in many SAP datacenters worldwide.

Tweets of the demo:

Here’s a video I made of the demo: 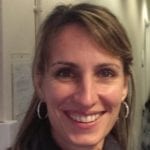