These days the effective management and movement of information is at the heart of economic growth, a better-informed future, and innovation. Also, the increasing pervasiveness of IoT is setting the space up for exponential growth. Experts say that by 2025 there will be more than 38 billion connected devices producing real-time data. IoT has the potential to transform our economy, society, and environment for the better, but the structure of today’s data economy will not allow most businesses to reap all its benefits.

Today most information systems are completely centralised, which prevents plurality and diversification, both of which are key enablers of innovation. It also means individuals can’t effectively exercise control over their data, let alone monetise it so they can play an active part in the data economy.

In addition new regulations like General Data Protection Regulation (GDPR) in the EU and California’s CCPA, make it more difficult and risky for businesses to share customer data with third parties. The current state of the data market, therefore, sabotages its immense economic and societal potential.

In essence, the problem stems from the centralisation of data sharing infrastructure that has control over third party access to consumers’ data. This means that the rightful owners of data – consumers themselves – can’t control third party access to their data as mandated by GDPR. Instead, companies complying with GDPR must aggregate and anonymise consumers’ data before sharing it with third parties. This limits the potential data applications because aggregated data is useful for discovering patterns and correlations, but doesn’t let companies sense and respond to the needs of specific customers.

Laying the Foundation for a Decentralised Data Economy

With the goal of laying the technical foundation of a new, decentralised, and distributed data economy, EcoSteer – an IoT and Blockchain start-up for data ownership and monetisation – aims to turn privacy laws from an obstacle into an opportunity. Its Data Ownership Platform (DOP) decentralises IoT data access control and puts it back into the hands of the legal data owners while implementing a compensation mechanism for data sharing based on Blockchain tokens.

As the only software capable of automatically granting and withdrawing consent to access personal data in a granular way, DOP has the potential to provide a universal privacy technology overlay. It may come to serve as a ‘personal data-sharing intermediary’ that helps people exercise their rights under the GDPR through neutral means.

One application of DOP is the deployment of GDPR-compliant, decentralized corporate or institutional data streams marketplaces, where companies and institutions can involve business partners and consumers in a data monetization cycle that is GDPR compliant by design. Thanks to DOP companies and institutions can monetise their IoT investments, minimizing all legal liabilities and costs related to existing centralized data sharing platforms, while incentivising data sharing and ‘digital altruism’.

The Prospects of a Decentralised Data Economy

The IoT data monetisation market is set to reach €6.1 Billion by 2025, growing at a CAGR of 21.7%. Its growth is directly related to the number of IoT devices used by consumers and companies, which will reach 50Bn by 2030. Decentralisation creates a win-win situation by putting in place a strong and sustainable foundation for the future that belongs to everyone.

Based on end-to-end encryption and smart contracts, EcoSteer’s DOP adds a decentralized layer of data access control to corporate IT data sharing platforms. Data can be encrypted at the point of its generation (an IoT device) and thenflows through the data sharing/streaming platform, and it can only be decrypted at its point of usage (the data user’s application)  after explicit consent from the data owner. This consent is given and can be revoked via a smart contract.

By decentralising data ownership, the Blockchain smart contract enables the data owner – which can be any business or person – to unilaterally give selected data users access to their information, and revoke it at any time. Data owners, being in control of their personal data, can also monetise it – exchanging it for tokens with chosen players and entering the data value chain as active entities.

DOP is an overlay network, so the processes of granting and revoking visibility into data streams are independent of the data origin and the data distribution system. Decoupling infrastructure access control, which always remains in the hands of the data broker’s owner, from data visibility control, which belongs to the legal data owners, makes the DOP GDPR-compliant by design.

When thinking about the deployment of DOP, certain aspects were important to consider. Being an overlay network independent from both the data source and the data distribution platform, the DOP can be retrofitted into any existing corporate infrastructure to support any business purpose so organizations can deploy their own GDPR-compliant data streams marketplaces. And thanks to its small footprint, the DOP can be installed on any device that works as data source with a simple remote software upgrade.

Given that the number of data owners and users with multiple edge devices will be in the billions, the adoption of a broker-based architecture capable of processing high volume of real time data streams becomes a necessity. In addition, the level of interoperability needed to accommodate different protocols dictates the adoption of technologies like an event mesh.

Why we Chose an Event Mesh Powered by Solace PubSub+ 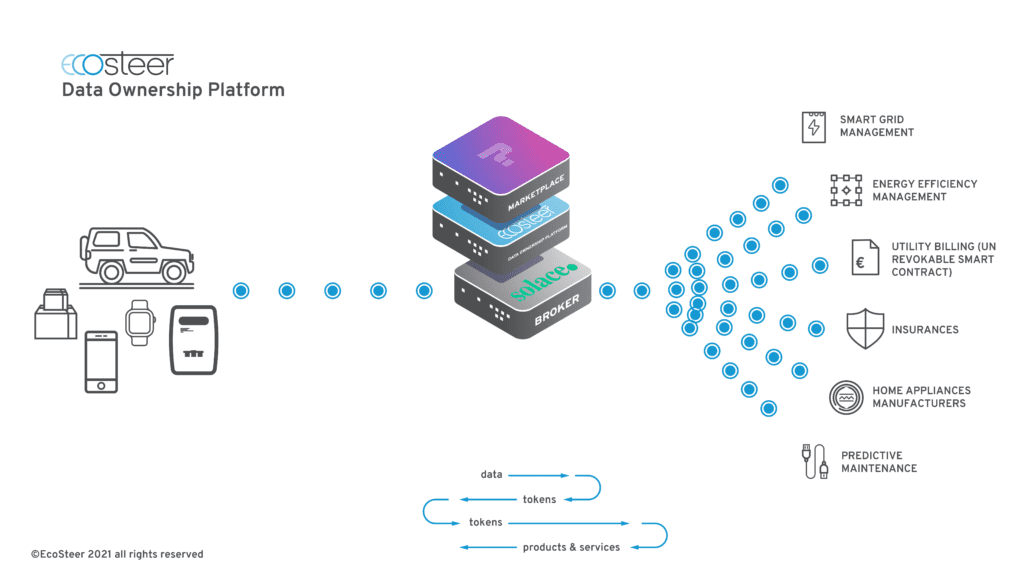 With support for multiple protocols and a highly performant platform, our PubSub+ powered event mesh gives stakeholders, that implement DOP from Ecosteer, the ability to deal with huge amounts of data and many stakeholders in an easy, secure, and reliable manner.

Not only does DOP help businesses securely deal with large amounts of data, but it also helps GDPR-compliant and decentralised data streams marketplaces allow companies monetise their IoT investments while minimising the costs and risks related to existing data sharing platforms. 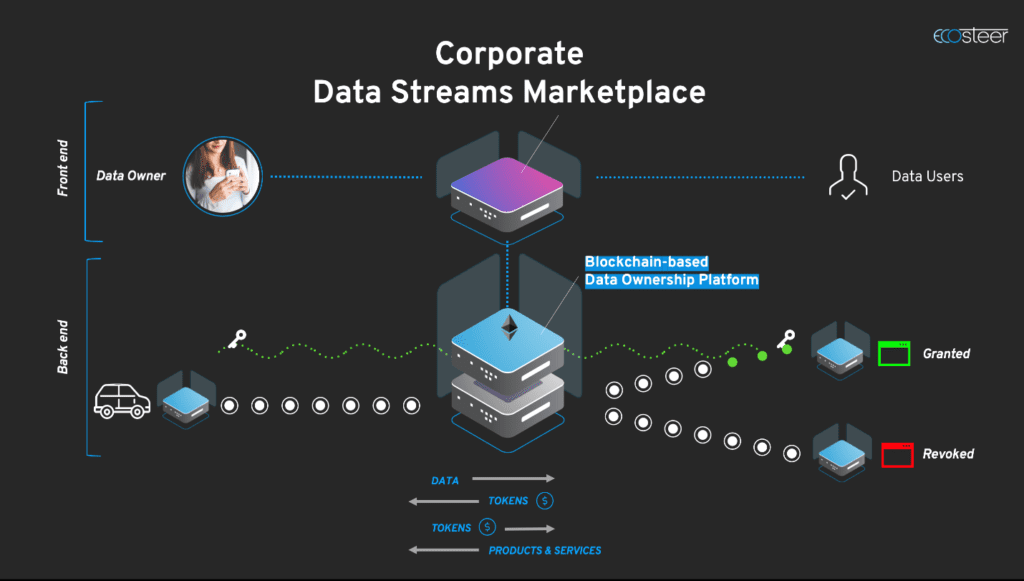 Ludovica Barozzi, Software Developer, Ecosteer
Graduating in Computer Science, Ludovica has always been interested in technology and its applications, with a particular attention to its digital aspects. After having approached the programming in high school, she decided to proceed in this field at the university. In 2020 she started her career as software developer in EcoSteer.

Gabriele Sankalaite, Software Developer, Ecosteer
With a background in Arts, Gabriele has a strong skillset in project development, communications, research, public relations, content writing and digital marketing fields. She is passionate about software development and with EcoSteer she started her career in the IT sector. She is also the creative Director at a non-profit foundation Unbore that fosters and advocates arts, life sciences and technology intersections.