I saw a headline in the Wall Street Journal speculating that the several year trend towards men wearing beards was coming to an end.  Like all shifts in fashion, nobody can say for sure what causes a trend to turn, but I hypothesize it might have been this photo.

In the world of computing, the rise of the cloud has left little oxygen in the press for anything other than the storyline that Amazon, Microsoft and Google (the tech fashionistas) have decided cheap servers running Linux are the answer to every computing problem. When one unit of compute isn’t enough, you write your software to split the workload two ways, or four, or eight, or a thousand. If you find that hard, too bad, hire smarter people like Google and Amazon.

Horizontal scale on cheap CPUs became a religion, and anything that didn’t look like AWS EC2 was like telling the girlfriend who bought you a flannel shirt for your birthday, “sorry, I don’t want to grow a beard”.

The Cloud Leaders have been Quietly Adopting Special Purpose Hardware

But very quietly for the last couple years those trendsetters have been swinging the pendulum back the other way. Then not so quietly, just this week at Ignite, Microsoft announced that they are moving Azure to a hybrid architecture where every server has Intel cores AND reprogrammable engines based on FPGAs, dedicated memory and digital signal processors. Stories in Wired, PC World, and Ars Technica confirm that Microsoft is “betting its future” on FPGAs.

Why would Microsoft do this? Because FPGAs have not fallen victim to Moore’s law, and continue to scale vertically in performance, whereas traditional CPUs just add more cores (horizontal scale). In other words, they can be 100X faster at extremely high-volume tasks. It’s just faster, easier and less error prone to write code for one super-fast processor than splitting and coordinating the work across 100 servers (or cores). Yes, many lower-scale needs are met by cheap compute, but when it comes to scale, architects need horizontal AND vertical scaling in their toolbox.

While Microsoft is the first to make such a public announcement, evidence that this is happening everywhere has been popping up lately. In 2015 Amazon bought Annapurna, a maker of custom silicon, to tackle its unique under-the-covers computing requirements. Wired exposed Google’s strategy of building its own silicon to improve upon the standard chips from commodity suppliers.

Scaling horizontally across cheap commodity servers is great for lots of problems, but these companies have acknowledged that they need more horsepower to tackle the big problems that will shape the future – like cloud scale, machine learning and networking.

Smart enterprises have understood this for a while. Having lived through an era where they turned their business processes over to ERP vendors, then later found out that it was hard to differentiate when everyone does everything the same way. The same is true when they rearchitect for cloud today. Technology analyst Ovum earlier this year declared that a combination of appliances and cloud will drive the next big wave of computing. If you need still more validation of the trend, even the new iPhone7 has an FPGA lurking under its covers. You can’t get more mainstream than that!

Solace Gives you the Choice of Horizontal AND Vertical Scale

At Solace, we built our company to solve the huge problem that sits at the very bottom of the application stack – moving real-time data between all kinds of applications. Messaging has to be more scalable and reliable than everything above it, or it falls behind. 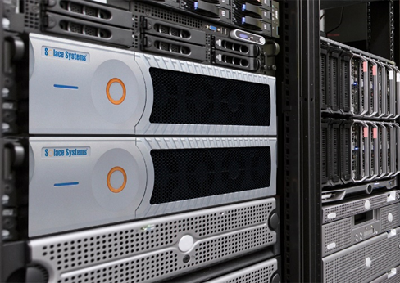 The very first conclusion we came to was that the software approach that had dominated until we came along could solve many problems, but not the really big ones. We went to work and by 2008 had built an appliance that outperformed all the software products on the market by orders of magnitude. Where a popular open source product like RabbitMQ can handle tens of thousands of messages per second, Solace appliances can broker tens of millions. And the world’s biggest companies have been eating it up. Solace is the fastest growing messaging and data streaming company in the world, and arguably (there is no third party data, but ask your company’s IT architects) sells more high-scale messaging than anyone in today’s market.

Having solved the high-end hardware problem, in 2015 we released our software VMR product using all the lessons learned. We now uniquely have both tools in the toolbox – a 100x scale advantage hardware appliance solution and a 2-10x higher throughput software solution, where every other viable messaging option offers only (slower) software. If you run out of steam in one broker, you are forced to scale horizontally, and deal with all the complexity that introduces.

Smart Cloud and Enterprise Providers Saw through the Trend

Enterprise cloud provider SAP saw an opportunity to differentiate from their peers in their cloud infrastructure and selected Solace as the messaging for their SAP HANA Cloud Platform a year ago. Today they are running their IoT solutions and messaging as a service on Solace through that cloud infrastructure using a combination of appliances and software. This decision saved them from spending cycles on their own messaging layer, and sets them up to compete at scale with the other cloud majors.

Shave or Don’t Shave – The Key is Having the Choice!

Enterprises have come to the same conclusion that Microsoft, Google, Amazon, SAP and even John Travolta have come to – not everyone should wear a beard. There are challenges that work well for lighter workloads through horizontal scale with software, and there are core challenges that are solved much more easily and reliably with the muscle of hardware. Messaging is very clearly one of those functions with both requirements. The aggregate volume of messages flowing in any enterprise these days is in the millions to trillions per day. You can embed appliances into your Private Cloud infrastructure as easily as you can software, and a lot of your complexity and reliability problems disappear.

So let this be a message to all the IT architects and developers. You can keep your beard, or you can shave it and still be taken seriously as a technologist (metaphorically speaking), all without falling out of step with Amazon, Google, Microsoft, SAP and the big boys of cloud. The jury is in: software and accelerated hardware together – the right choice for the right job – give you more and better options than trying to solve every problem with horizontal scaling.