Stephen Hoogasian is a former US Air Force pilot with extensive experience in application of C2 information systems.  He has reviewed the utility of hardware routers such as Solace’s application within the Department of Homeland Security and Department of Defense. Mr. Hoogasian flew aircraft including the U-2 high-altitude reconnaissance aircraft and T-38 jet shown here. 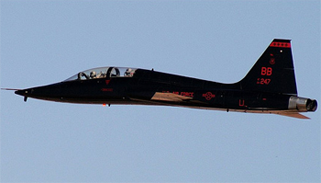 What is the potential benefit of using hardware-based solutions vs. a software solution to solve the problem of routing information? Speed—the maximum speed at which a system can process a given volume of information. That’s where the difference shows dramatically.

As an aviator, I cast the problem set into a vein I was more familiar with—that of aerodynamics. In aviation, induced drag (the drag due to lift generation) tends to be greater at lower speeds because a high angle of attack is required to maintain lift. As speed increases this induced drag becomes much less, but parasitic drag increases because the fluid (air) is flowing faster around protruding objects.

Okay, so what does this have to do with routing? Think of a software solution as a Cessna 172. Solid, reliable, and much faster than walking or driving, but eventually limited in the speed it can achieve, even with a big reciprocating engine on the front. There’s just too much parasite drag in the design. At some point, you have to go to a cleaner aircraft design with a more powerful engine to eliminate the drag increase inherent in the Cessna to achieve desired higher speeds.

Another example might be the power source itself—a reciprocating engine vs. a jet engine. If you have a reciprocating engine at maximum velocity you will reach redline around 7, 000 or perhaps 8, 000 rpm in a race-car application. The engine parts are moving as quickly as balance and physics allows before the whole thing just comes apart. Typically in an aviation application the reciprocal engine would be limited to around 3000 rpm max for safety. By comparison a turbojet can easily see 30, 000 RPM or greater—fewer moving parts, less drag, more thrust and more efficiency.

So returning to the original question: What is the potential benefit of hardware based routing of information as compared to a software solution? Answer: A huge reduction in parasite drag incurred by software based processing solutions when you have a high throughput of information. At some point, the information throughput capability of the software can’t keep up with demand—even with powerful, high speed CPU’s a backlog still occurs. That’s where the real benefit of the hardware shines. When split-second situational awareness and decision making requires the processing and filtration of huge volumes of information in real time, a hardware-based solution introduces far less parasitic drag than the software systems of the past. The “need for speed” necessitates a hardware solution.