The Internet of Things is not on the way, it’s here.
And it’s coming for the animals.

At Mobile World Congress last week, while the rest of the world was talking about wearable technology like Samsung Galaxy Gear Fit and Sony SmartBand, NTT Docomo unveiled a new service that lets farmers know when pregnant cows are about to give birth by tracking their body temperature and sending an alert when Bessie’s ready to go into labor. The service has already been deployed with over 30, 000 cows, and it’s apparently reduced calf mortality from 10% to 1% while saving farmers time and energy by eliminating  repeated trips to the barn to check on the cows nearing full term.

Earlier in February, NTT also announced a service that allows pet owners to track their dogs. It works very much like the activity trackers mentioned above, seeing how much exercise the dog gets and monitoring eating and sleeping habits. And when Fido strays from the yard, the owner is alerted and sent the dog’s location thanks to the GPS chip embedded in their tag. 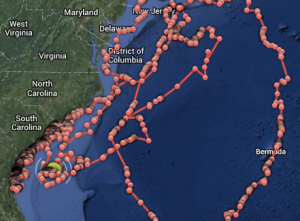 Real-time shark tracking: From the Verge

The capabilities enabling these services aren’t revolutionary, of course – Scientists have been tracking the migratory patterns of various kinds of birds and animals for years. You can even track the real-time location and recent movement of sharks! What’s changing is the economics around the Internet of Things, as sensors are now cheap enough that large numbers of sensors can be deployed cost-effectively enough to build commercially viable services on top of them.

The lower cost of sensors, combined with rapid improvements in large-scale data collection techniques, makes it easy to understand why there is so much hyperbole about the potential size of this market. OK, maybe $19 trillion is a stretch, but if you just start counting up cows, dogs, migrating birds and sharks, it’s a mind boggling number of endpoints.