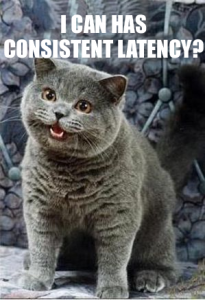 Let’s face it, if you want to get attention on the Internet, you have to fall in line with the concept of memes. These are the ideas that take on a life of their own, such as the dramatic prairie dog or the VP dropping an F-bomb. Twitter’s version of memes is the concept of trending topics based on frequently tweeted keywords. This lets you see what topics people are talking about at a glance.

If dialog in the low latency finance community had that concept, it appears that “consistent latency” would be moving up the charts. For the majority of 2009, the focus was just on making everything faster. Lower the latency, shave a microsecond here and there, and so on.  This year, it seems that people have figured out that the harder thing to achieve is predictable latency. If you’re going to turn decision making over to algos, you need to be confident that the information that feeds them is current.

There was an article today at A-Team’s site where Scott Kennedy of Thomson Reuters was making just this point. His opinion:

“The future of competitive differentiation will be about predictability of performance instead of about speed.”

We agree with Scott. Consistent performance is one of the key reasons why trading firms are turning to hardware. Operating systems lead to variability and delays since they can get brain-locked on task switching in ways that hardware just doesn’t. This leads to the the enemy of trading profits — latency spikes.

Sure it’s fun being fastest, but it’s much more gratifying to see the topic of conversation evolve to what actually makes a difference to the business: making money. Well, that and talking cats.