Many people think Sun Microsystems is in limbo—stuck between the company they were and what they’ll become as part of Oracle. Competitors have suggested that Sun has stopped innovating and that it’s time to move to another platform. But as a close partner of Sun’s, I can assure you that the picture inside Sun is very different. Their best minds are still generating great ideas, solving customer problems and pushing the boundary with innovative new technology. Some of you may have seen Oracle’s recent ad in the Wall Street Journal (and many other places) declaring that they are looking forward to taking on IBM head on in the hardware business.

Solace signed a partnership with Sun shortly before the Oracle acquisition was announced in the spring. Sun’s technology assets and Solace’s high-performance JMS solution have generated interest with Sun customers since we began working together more than a year ago. Sun is a powerhouse in the data center of many of the country’s largest, most demanding companies, including most of the major banks. For our part, Solace is reshaping what has traditionally been software-based middleware into a hardware asset more like a network appliance than a server. 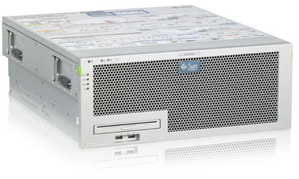 The combination of these two strengths is the basis of a new prototype appliance we demonstrated in the Sun booth at the SIBOS show in Hong Kong September 14-18. This new Sun financial network appliance combines the massive throughput and easy management of Solace’s messaging technology with Sun’s hardware and software to build a flexible solution for integration between back office banking systems and leading payment networks. Integration with payment systems is a notoriously complicated thing to get right, and the turnkey approach of this appliance can make connectivity faster, easier and more profitable for participants of banking inter-networks.

The appliance is based on the Sun Netra x4450 chassis, a powerful virtualization server that’s designed for telco-grade reliability in a low-power 4U form factor. It includes Solace’s JMS broker and middleware functionality with appliance-style turnkey administration. Finally, it includes Sun’s Secure Network Layer software as well as the Sun Integrator platform for easy integration of banking assets.

In related news, Solace announced a new version of our JMS protocol that’s used for this appliance, and is also available directly from Solace. It sets new standards for JMS performance with support for 100, 000 persistent and 11 million non-persistent messages per second.

We look forward to a long and successful relationship with Sun (and eventually Oracle).