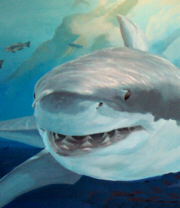 Sharks are so deadly and efficient that they’ve been called “the perfect predator.” That’s why I find it fascinating that they’ve been the top predator in the oceans for literally hundreds of millions of years, and haven’t changed much since the extinction of the dinosaurs. Why not? They didn’t need to! Their basic design was so good that it only needed tweaking to survive while other species in water and on land died out (sorry, dinosaurs) or evolved so much you wouldn’t recognize them from their ancestors. (sorry, creationists)

Sound like any networking technologies you know? While I hesitate to admit this, I’ve been using Ethernet since before some of you were born. Ethernet may not be perfect, but it’s very much like the shark in that aside from improvement over time (higher bandwidth, new kinds of wires) it’s a lot like its ancestors. In fact, I have some “museum piece” computers at home running 10 MbitE that are talking to my 1 GigE hosts.

I won’t complain about how I used to walk to school every day (In the snow! Uphill! Both ways!), but I do remember implementing Ethernet over thick N-Series cable by connecting a DIX (Digital-Intel-Xerox standard) with “Vampire Clamps” and connecting the network card to the DIX via a transceiver cable. All that for 10 Mbits/second!

Today Ethernet runs over twisted pair and fiber, and it flows at up to 10 Gbits a second. Switches have taken the place of DIX and N-Series cables, and the interface technology is now extremely intelligent NIC cards. The protocol itself has been tweaked and standardized (thank you IEEE), but it’s alive and kicking. By comparison, when’s the last time you implemented any Token Ring? Have you upgraded your FDDI network to the latest version? Bought any XNS from Xerox lately?

Is 10GigE the end of the road?

10GigE brings us up to the bus speeds of PCI so I can’t go any faster in transferring data from the network card across the bus for processing in my computer. Does that mean 40GigE and 100GigE, both already being discussed, represent a case of a misplaced “bigger is better” mentality? No way, Jose!

What about new technologies like Infiniband, Fiber Channel, QsNet or Myrinet? Will one of them displace Ethernet? Only time will tell, but I personally think that in a couple years they will be footnotes in the Wikipedia page about 100GigE.

Here’s some of the reasons we’re always gonna need a bigger boat, and why I believe Ethernet will continue to be the networking technology of choice for many years to come.

The Future of Ethernet

As the deployment of the hardware message router allows the volume of messages and hosts to increase, there will eventually be a need to aggregate the messages through higher volume and lower latency networks. Solace and other throughput-conscious vendors have built their products ready to accept and support 40GigE and even 100 GigE when they are available.
Building around a standard technology that can evolve and interact with earlier versions of itself represents the most logical and cost-effective path. That’s why Ethernet will continue to survive and evolve because, like the shark, it has a great basic design that can be improved with relatively minor modifications.