The Internet of Things is finally happening at mass scale as the cost of the sensors, networks and computing power has made the economics work. There are many articles on the web that focus on the sensors, the processes and the opportunity for analytics to drive new efficiencies using IoT, so I will focus on how the data moves from place to place within the architecture. You might also be interested in a blog post called  “Why IoT Needs Messaging”.

In an IoT architecture there are four different kinds of connections across which data moves:
1) device to device, 2) device to gateway, 3) gateway to data system and 4) between data systems. 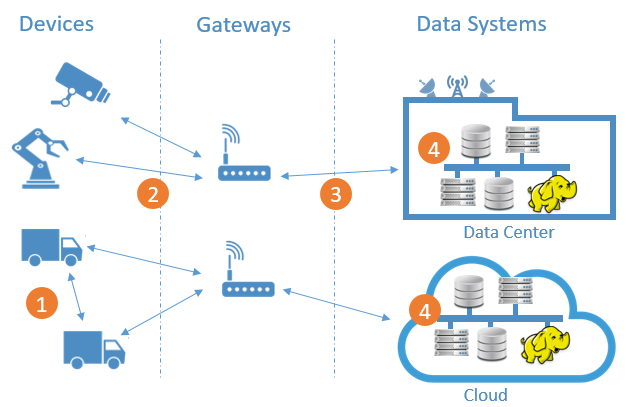 When devices need to communicate with other devices, the use case likely requires that they receive data instantaneously because the timeliness of the incoming data is paramount.  Examples of device to device communications include:

Very few IoT applications today include this form of communication, mostly because the devices are not sophisticated enough to handle them. As time passes, technology continues to advance and use cases become more sophisticated, this will become more common.

Each “thing” needs to send its data to an aggregating gateway node through what is sometimes called the “fog” layer. They call it the fog because gateways can physically reside in a wide range of places depending on requirements, including clouds and datacenter DMZs protected by security firewalls. Gateways perform two common functions. First they consolidate and route data from sensor devices to the appropriate data systems within the datacenter or cloud. Second, they can analyze or aggregate device data and forward that data to the core systems and/or respond back to devices if a time-sensitive exception condition is noticed.

The type of data or message exchange pattern that’s best depends on the device’s capabilities and what it is asked to do. How much power, processing, and persistent and non-persistent memory does it have? What is the network capacity and how reliable is it?  How often does the device generate data?  How important is its data quality? How secure is the device?  These criteria will determine what protocol and quality of service is the best choice to move data between the device and the gateway.

The gateway is usually a much more capable computing device than the sensor, with a reliable and fast network connection. So here the determination of what message protocols and qualities of service to use is driven not by the gateway’s computing capabilities or connectivity, but by data traffic patterns such as periodic burstiness and congestion, number of concurrent connections required, and security requirements.

Between the data systems in the datacenter or cloud

Within the secure datacenter, requirements such as integration with existing applications, high throughput, high availability, disaster recovery and ease of deployment become the critical decision factors.

Of course, this flow of data is bi-directional: while much more traffic will “fan in” from device to gateway to datacenter, select data will also “fan out” from datacenter to devices to initiate change or adaptation of the “things”.  An example would be a connected car whose navigation system learns about a new accident and updates the navigation system with new route data.

When selecting messaging protocols for IoT, you will want to approach the challenge on a connection by connection basis. It is unlikely that you’ll be able to choose just one protocol for the end-to-end picture above without compromising some aspect of your system. First let’s understand each of the commonly used protocols and what they do best.

MQ Telemetry Transport is an open standard protocol maintained by OASIS, designed for IoT communications over TCP. There are currently two versions in use, MQTT 3.1.1 and MQTT 5.0.

MQTT was developed to meet device to gateway messaging requirements, and doesn’t meet most needs of gateway to a datacenter or intra-datacenter connections.

Java Message Service is a 15-year old messaging standard first defined by Sun Microsystems, widely used to integrate server applications like databases, analytics engines and business process automation engines with a message bus.  JMS defines a standard set of APIs, but does not specify a protocol. That means you can choose from among many JMS providers, but different JMS stacks do not interoperate on the wire. JMS is primarily used with Java applications.

If you have a well-established JMS footprint, it may make sense to continue – it’s proven, it’s easy and it requires the least change to existing systems. If you have a greenfield application, or your toolset can as easily support AMQP or JMS, many architects would choose AMQP over JMS today for reasons I’ll explain next.

Advanced Message Queueing Protocol is a wire-level binary protocol that allows any AMQP client to communicate with any other AMQP server, regardless of programming languages or platforms.  Although AMQP may not be suitable for sensor devices with limited memory, power or network bandwidth, it’s the only protocol viable for end-to-end use for select IoT use cases. For example, in Industrial IoT, such as factory machinery or SCADA systems where the device and its network are substantially capable.

It is worth noting that one of the most popular APIs used with AMQP is JMS. This means that if you currently rely on tools that provide JMS integration at the API level, by choosing an AMQP protocol/broker accessible via JMS, you can migrate towards AMQP without recoding applications. I’ll write more about this important concept in the future – stay tuned.

RESTful interactions rely on HTTP methods, which means no client library is required on the client side. This could be useful for a very simple device/sensor that only requires one-way (outbound) communication because it means any service that can receive RESTful POSTs can receive data from that sensor. The trade-off is that you don’t get any of the behavior of a messaging protocol. If the server is unavailable or backlogged, data from the sensor will be lost, unless the sensor application handles buffering and retries in the application code. There are benefits to a messaging protocol in an end-to-end system like an IoT application which has previously been discussed above. 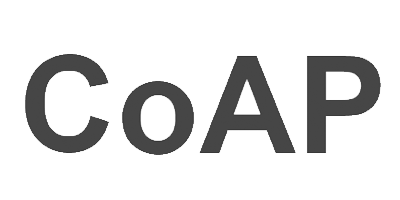 Constrained Application Protocol is based on a subset of HTTP methods like REST, but adds limited quality of service and works with UDP only, not TCP. It was designed for constrained device connectivity in the early days of IoT’s emergence – it stands for “Constrained Application Protocol.” Since MQTT’s arrival as a standard, with its equal handling of constrained devices, and much broader feature set beyond that, few people are choosing CoAP for new efforts. You are likely to choose CoAP only if it is the embedded choice for a sensor device, and you must support an application that already uses it. 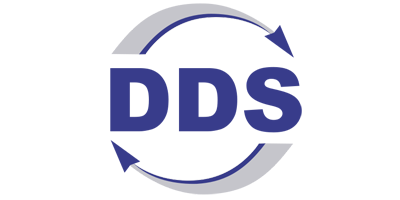 Data Distribution Service was designed to connect devices to other devices with minimal overhead.  DDS implementations have direct device-to-device “data bus”. To use DDS, you create a set of topics, with their own data types. Instead of relying on a message broker, data publishers and consumers get matched through the data bus based on their types, topics and quality of service (QoS) parameters. Also it can run over UDP (multicast), TCP, shared memory, and other proprietary networks. Instead of relying on the transport layer for reliability, it has its own per-stream reliability protocol.

In summary, each link in an IoT architecture has different needs and dynamics and most application requirements will likely lead you towards using multiple protocols within an end-to-end application. For any given link, your choice may be obvious based on your requirements, in which case you can just get on with it. If your pros and cons list makes the choice difficult, it is generally good advice to pick the most open protocol or API you can. It will maximize your options in the future as your application evolves.

Whichever protocol or protocols you pick, note that Solace technology can meet your message routing requirements thanks to broad protocol support and the ability to be deployed as a single HA cluster or a tiered deployment of message routers that supports millions of connections and messages per second.