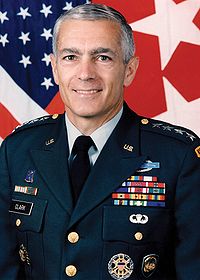 I would like to extend a warm welcome to retired four star US Army General Wesley Clark, who formally joined the Solace Board of Directors at our last board meeting a couple weeks ago. Many of you will remember General Clark from his time as NATO Supreme Allied Commander Europe when he led Operation Allied Force during the Kosovo war (1997 through 2000). Either that, or you may remember his run at the Democratic Party presidential nomination during the 2004 primaries.

In addition to his experience with government and security organizations during a 30 year military career, Mr. Clark has also been engaged in a variety of other markets since entering the private sector, notably the capital markets and energy. We look forward to working with him to refine our strategies and grow our business around the world.