While the financial meltdown is legitimately shaking the foundations of finance, there’s one thing that hasn’t changed: traders continue to trade and algo trading engines continue to algo trade. As serious and widespread as the financial issues run, it’s important to not throw the baby out with the bathwater. The divisions of the large investment banks that got caught in the mortgage or credit default swap trap represent a relatively small percentage of their activity  — they just suffered devastating losses in those areas.

Trading and algo trading in equities, options, futures, FX and other asset classes have been solidly profitable for the banks these past many years and continue as a strategic part of the business going forward. The numbers bear it out. Market data rates and trading volumes have continued to rise even as the crisis has unfolded. The all time peaks in virtually every asset class were set during October 2008.

Looking at marketdatapeaks.com, we see that just last week on October 10th, the all-time peak for market data was 1, 383, 703 messages a second (the sum of NYSE/SIAC, NASDAQ, OPRA, ARCA, BATS and Direct Edge, both Level 1 and 2) . Almost half of that was OPRA volume. If we look at recent OPRA volume, and current projections going forward it becomes clear that financial services is not closing up shop. The following graph is from the Financial Information Forum, which tracks market data growth rates. 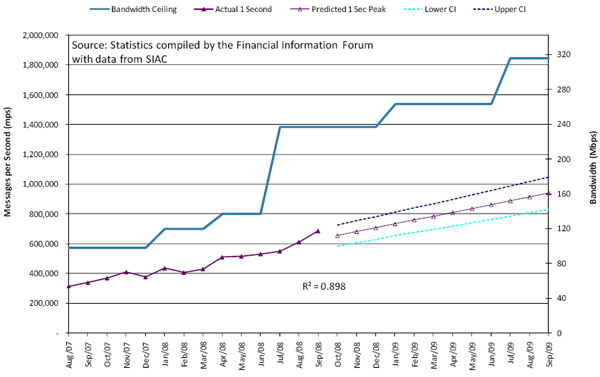 What about share volumes? Looking at the Dow Jones Industrials as in indicator: 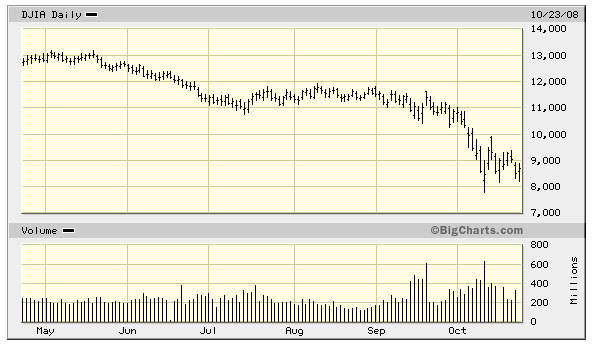 Clearly, the volumes since the beginning of September have been accelerating, and it isn’t retail investors driving these volumes, it’s the pros.

There’s no doubt that the crisis is for real, and it may mean less risk and leverage in the future, but traders will always trade. Expect algorithmic trading in particular to come out the other side of this crisis as a bigger part of the banks’ financial strategies going forward.