Every firm is concerned about power, but the problem continues to spiral out of control. Here’s a typical scenario that describe why things are the way they are: 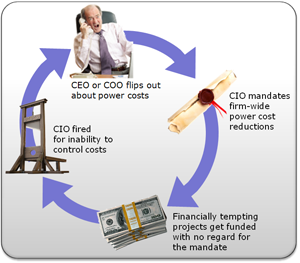 The CIO makes what looks like the right declaration: “We WILL reduce power, no matter what”. Then good, honest projects come along that boost the top or bottom line and become exceptions to the “no matter what” part of the edict.

It is well documented that CIOs tend to last 2-3 years, and a typical IT worker will outlive several CIOs. Through time, these declarations take on the flavor of The Who’s immortal observation — meet the new boss, same as the old boss. Go on, click and waste the few minutes listening to vintage era Who. You know you want to, and it’s more energizing than drinking 2 cups of coffee. Not only that, but it immediately erases the memory of their Superbowl performance.

The best way we have seen to get the foot soldiers aligned with management objectives is to tie a meaningful piece of their compensation to it. Then everyone is aligned to find a way to make both kinds of “green” (more money and less power) happen. The good news is when half your annual pay is tied to anything, it becomes your focus. The bad news is this only works in financial services where bonuses are large enough to motivate. Having half of a government workers 10% bonus tied to power usage won’t change anyone’s behavior. They will become a bigger star, and get a bigger raise for delivering better or faster than they will for delivering cheaper.