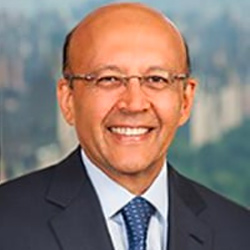 Prior to founding Bridge Growth Partners in June, 2013, Mr. Singh was a Managing Director at New Mountain Capital. Over the course of nearly 12 years there, Mr. Singh served as Chairman of Red Prairie and JDA Software, and as a Lead Director of Deltek, Ikaria Holdings, Camber Corporation, Stroz Friedberg and AmWINS. He also served as a Director of Validus Holdings, EverBank Financial Corp., and Avantor Performance Materials.

Mr. Singh began his investment banking career at Bankers Trust, where he was a founding member and Managing Director of the Mergers & Acquisitions Group and later became responsible for the firm’s investment banking activities in the consumer and retail sectors, leading relationships with a number of major multi-industry and consumer product clients. Mr. Singh was elected a Partner of Bankers Trust in 1994, and in 1997 he joined the financial sponsors group of BT Alex.Brown. In 2001, he joined Barclays Capital, where he established and led the Corporate Financial Advisory Group before joining New Mountain in 2002.

Mr. Singh is an advisory board member of The Center for a New American Security, a member of the Dean’s Council of Weill Cornell Medical College, and a member of New York University’s Stern School of Business Board of Overseers. He received his B.A. in economics and history and his M.B.A. in finance and international business from New York University.