Using the Google Consumer Survey (GCS) tool, we surveyed consumers on their attitudes toward connected cars and their willingness to trust, use and advocate for this emerging technology.

The survey polled U.S. online consumers who identified as connected car drivers. All results were weighed against the U.S. Census Bureau Current Population Survey for age or gender so as to be representative of the adult U.S. Internet population.

While consumers and, more specifically, connected car drivers, are open to incorporating new technology into their driving experience, they are not ready to hand over the wheel. Drivers today prefer technology that has an “influence” rather than a direct impact on their driving.

As automobile companies look to invest more in connected and autonomous vehicle technology, they will need to better understand how response times and performance of connected capabilities impacts consumer trust.

Most connected car drivers would not buy a self-driving car

Almost 60% of connected car drivers would not buy a self-driving car — even if cost weren’t an issue.

It’s long been assumed that cost would be a significant barrier to entry when self-driving cars enter the mass market. However, the results to our first question tipped the scale toward the other commonly-cited barrier: distrust in autonomous vehicle technology.

Consumers feel safer in connected cars, but don’t want to lose control of the driving experience

The responses here shined a light on the connected capabilities that are widely adopted vs. the technologies capable of taking over key experiential elements of driving, such as braking.

To explore trust at a deeper level, we asked respondents which aspects of connected car decision-making they least trust:

The data collected here goes against both widespread belief and other research on related topics. Millennials are thought to be the most open to handing over the driving experience to technology, but the responses here tell a different story:

When it comes to connected car capabilities, safety and navigation features are the most trusted and valued features for U.S. drivers.

Connected car drivers aren’t overly dependent on apps when they drive, but how the app performs impacts their driving experience

When asked how many applications connected car drivers depend on while driving, over 50 percent of respondents use one to two applications. Less than three percent noted using more than five.

About 15% of U.S. drivers said that if an app they’re using froze or stalled while they were driving it would create a poor driving experience. Additionally, almost two in five (17.5%) become frustrated while driving if an app provides incorrect information.

This is another example highlighting the difference between improving the driving experience vs. completely taking over the experience.

Almost half of U.S. consumers don’t know that connected cars could store their personal data, such as their home address, social security number, birthday, etc.

The responses here are worth thinking about in the context of discussions around data ethics and privacy. While consumers are increasingly aware of and sensitive to how social media and cell phone technologies are using their data, discussions around connected car data use are still in the nascent stage.

There is no clear leader among the top six car brands in the race to build innovative, technology-powered cars

When given a choice between the top six car brands* — Ford, GM, Honda, Toyota, BMW, and Mercedes — one in three consumers didn’t consider any of these brands a leader in having the most innovative car technologies.

*Car brands were selected based on FY 2017 US sales according to Motor Intelligence Autodata. The top two brands from North America, Europe and Asia were selected for the purpose of this survey.

Among younger drivers (ages 18-25), however, two companies do stand out: Mercedes (14%) and BMW (13%). Still, the results here point to how “best-selling” isn’t necessarily viewed as the most innovative. It also points to how lesser-known brands are likely considered the most innovative, but how there may be purchasing barriers limiting consumer access. 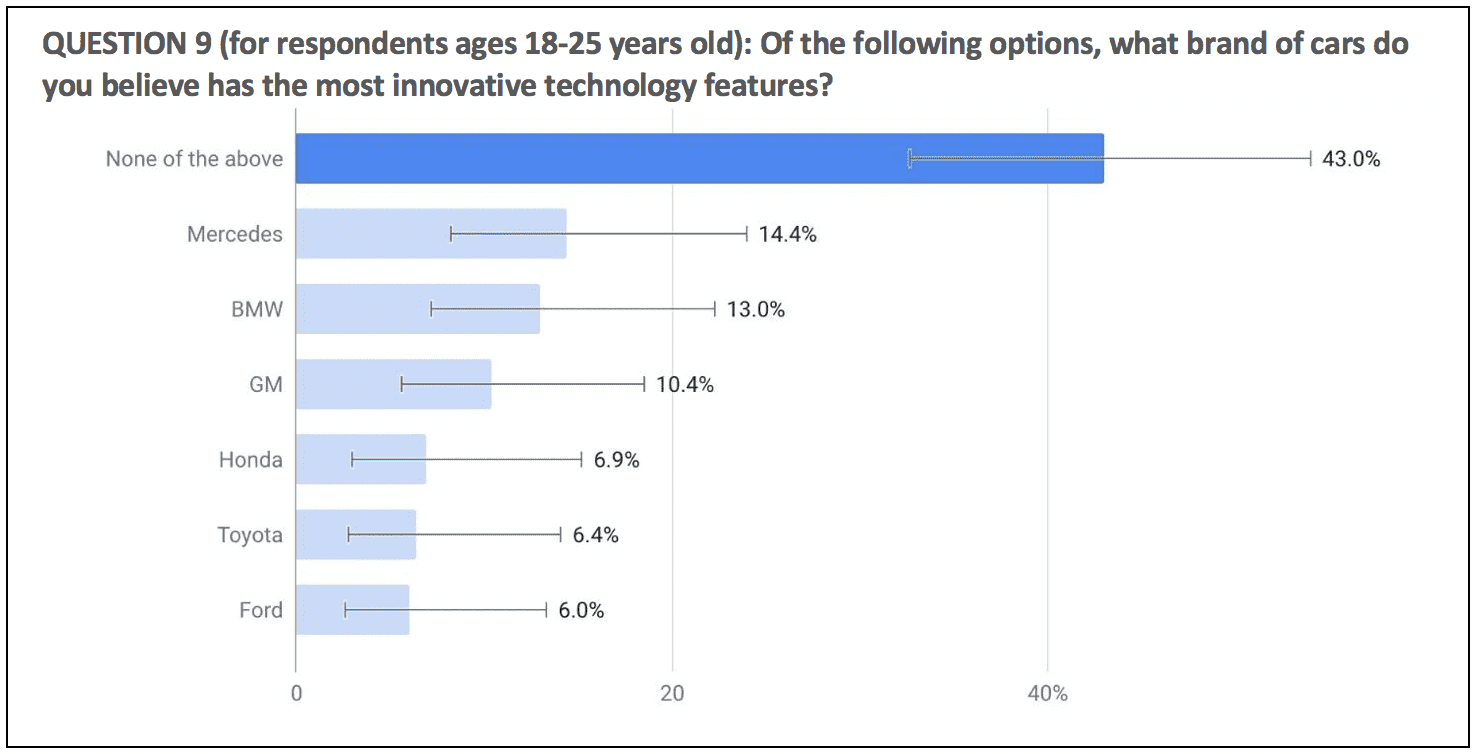 For connected car drivers, new connected technologies have clearly improved their driving experience. But in the buzz of excitement around self-driving cars, it’s clear that consumers are more comfortable with minor modifications than full-on experiential takeovers.

Autonomous vehicle technologies are improving by the day. This survey points to how the limiting factor to their widespread adoption is not the pace of technological advancement but the trust of consumers.

Connected Car Drivers: A Survey on Attitudes, Use and Trust from Solace