With more and more Internet of Things (IoT) devices entering the market daily, it’s getting easier and easier to capture interesting data from the sensors and control systems involved with running a modern city. Low Energy Bluetooth (LEB) devices, GPS, near-field communication, mobile apps, streaming apps — data comes from everywhere today, and cities are generating data at a rapidly increasing rate. Smart cities use this data to enhance the quality of life for their citizens, and there’s no better example than when you apply a “smart city” mindset to public transportation systems.

By optimizing your public transport systems you can help citizens get where they’re going more quickly by reducing congestion on roadways and intelligently allocating and routing buses to areas with more travelers. That means locals, visitors and workers spend less time in transit and more time enjoying your city, successfully completing errands or getting to and from work.

Finally, smarter transportation can reduce environmental impact. The EPA has found that investing in public transport and other types of transportation can lower greenhouse gas emissions. Considering that in 2017 the transportation sector represented the largest source of emissions from fossil fuel combustion, this is a significant win.

A Tale of Two Smart Cities: One with Smart Public Transport, One Without

Smart public transport may be the most important element of smart city planning because it affects everyone. All citizens and visitors need to get from one place to another, quickly and safely, and in today’s densely populated cities that means public transport.

In cities with smart public transport, people waiting at a bus stop know their bus will be on time because they get alerts about estimated arrival times. They may or may not know that their city’s department of transportation automatically deploys more buses when necessary, staggers arrival times to avoid “bus bunching,” and keeps buses on the go by continuously analyzing sensor data and proactively fixing things before they take a bus out of service.

Contrast this with a city not using data to make public transport more efficient — people will wait for a bus, worrying that it won’t arrive on time to get them to work, a doctor’s appointment, or a job interview. Data from the sensors on the buses would be stored in databases and analyzed in batches after-the-fact, preventing the DoT from dynamically re-routing buses or proactively fixing buses before they fail.

This seems like a no-brainer, doesn’t it? So what’s holding back progress on smart city public transport initiatives? Why are cities slow to implement this service? The answer is different in every city, unfortunately. In some cities, budget is the issue. In others, bureaucracy or lack of voter conviction stand in the way.

The good news, however, is that technology like ours is reducing the cost and difficulty of implementing smart public transport, making it easier to overcome financial and political barriers. The opportunity is available for cities willing to move forward with smart city public transport initiatives — even with the remaining challenges to face.

Many well-intentioned city planners or CTOs unwittingly create silos when trying to implement smart transport systems without the use of event streaming.

Let’s look at an example.

A fleet of buses is connected over 4G and equipped with 30 sensors to monitor speed, fuel efficiency, etc. Now, city officials want to measure the average speed of a route in order to gauge efficiency. It is one of the leading indicators of congestion management in a city.

Previously, this would have been handled via a REST call into a back-end system, with the data being written into a database. If you want to know the speed every second or every minute for all the buses in a city, how often are you going to poll for that information? The more often you poll the database, the slower it will be, and you could even impact your ability to write to it. So, it becomes an expensive matter of how many database licenses you can afford, instead of dealing with the matter at hand – how can we set up the system so we don’t rely on this type of integration?

The answer is event-driven architecture and an event mesh.

Event-Driven IoT and the Benefits of an Event Mesh

In keeping track of vehicles in-route and transit demand, many events occur per second. The timely processing of this information is critical to successfully operating a smart city transport service. In addition, any system downtime will result in significant loss of data — hindering your ability to operate at the capacity you need. 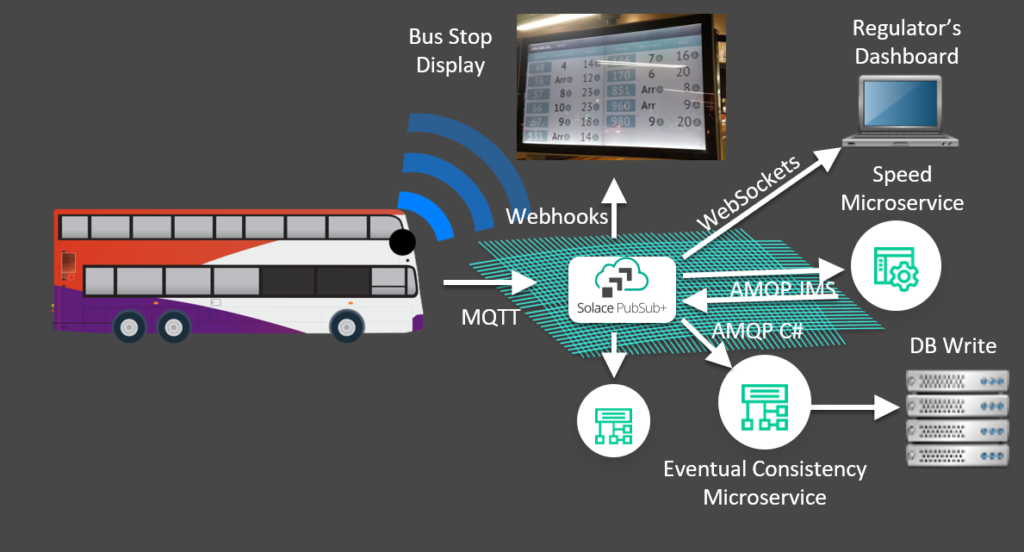 With event-driven architecture, you’re able to create a modular framework for your data to be processed in a stream, which will allow multiple organizations within your city to utilize data for their use case — from traffic lights to parking meters.

Instead of relying on polling, a network of event brokers – called an event mesh – can be used to publish data as it happens to the systems that subscribe to certain types (topics) of events.

The best part? When another project comes around that could benefit from the bus data, it can get a free, filtered stream of whatever information it needs. This means that as bus stop displays are upgraded, they can get a real-time stream of reliable status updates, as can new commuter apps.

The event mesh also offers guaranteed delivery burst-handling. Rather than being bombarded with the firehose of data from all the buses that are online, the database or system of record can get a copy of the data in a buffered manner. The inflow of data is throttled to the underlying systems, which is much more efficient and controlled.

With minimal land area and a growing population, Singapore’s government knew that transportation was becoming a bigger and bigger issue. As such, The Smart Nation Initiative has “transport” as a core focus area.

Singapore had rolled out the worlds first congestion based road usage pricing system – Electronic Road Pricing (ERP) – decades ago, but as a key smart nation initiative, the Land Transport Authority (LTA) of Singapore is now rolling out the Next Gen ERP system with IoT and event-driven architecture at its core. In this system, vehicles are equipped with onboard devices that leverage GPS to transmit real-time position, speed, and more. With this information, the LTA is able to implement real-time road tolling as well as finer-grained road pricing. Drivers are also able to receive real-time alerts to notify them of congestion, as well as suggestions of alternate routes to avoid tolling.

Bringing it back to average road speed for a second, it should be noted that Singapore is now one of the least congested major cities, with an average vehicle speed of 27km/h on main roads (compare this to 16km/h in London).

In 2020, the ITS system will extend to Singapore’s large bus fleet. The city plans to introduce autonomous buses that will reduce passenger density and improve bus punctuality.

Your public transport system is already producing millions of data points for you, and one of the greatest opportunities your city has today is to harness this data for smarter transportation infrastructure.

In a smart city, the amount of data generated per second can be staggering. You’ll need a system that can handle the magnitude of information coming in from the millions of events happening all over the city per day, while providing processes for citizen privacy. This is especially true for public transport.

In a world where city populations (and traffic) are growing, a smart transportation initiative based on event-driven architecture and powered by an event mesh is the best way to manage your public transport system.

Our event-driven solution is already helping leaders of smart public transport initiatives build the necessary event-driven architecture to carry them into a brighter future.

All of the IoT data that your city produces from sensors, apps and GPS becomes infinitely more usable when treated as events. An event mesh enables you to manage the events across multiple industries (transportation, energy, security, health services) and environments (hybrid cloud, multi-cloud, on-premises, and IoT).

By enhancing the system using a publish-subscribe event streaming and management platform, you’re able to manage the event volume that your city generates and organize it in a way that can be used safely by the entire city – not just one department (i.e. public transport). It’s scalable, reliable, and with its clustering features, downtime is significantly reduced. 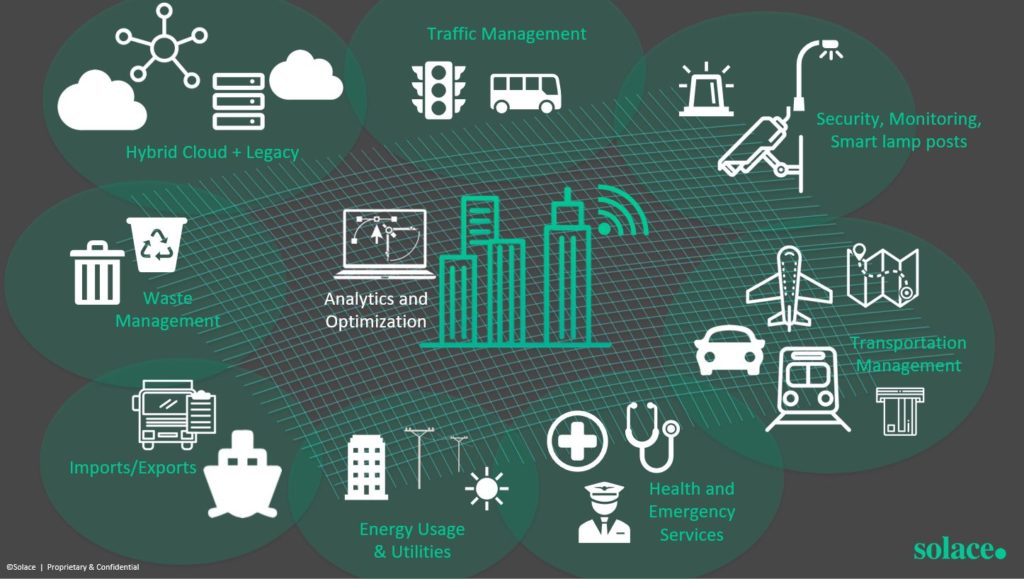 The multiple event brokers in an event mesh automatically stream the events to subscriber systems to do everything from re-routing buses to instantly updating bus displays to give travelers accurate information. Information goes from where it’s happening to where it needs to be so the right actions can be taken. 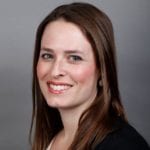 Sarah has honed her skill at breaking down complex topics into things that non-engineers and non-technical people can understand over the course of a career spent in the research and technology space for years, including a stint managing marketing for a company that built test facilities for gas turbine engines for the likes of Rolls-Royce and Pratt & Whitney.

With Solace Sarah has helped craft numerous articles and white papers about how event-driven architecture and microservices can help enterprises and government agencies improve operational efficiency, better serve their constituents and customers, and more through the Internet of Things, smart city and smart transport initiatives, supply chain modernization and more.

Sarah holds a bachelor of engineering (aerospace) degree from Carleton University. She is an avid painter, an average golfer, and a movie buff who enjoys watching and reviewing films of all eras and genres. 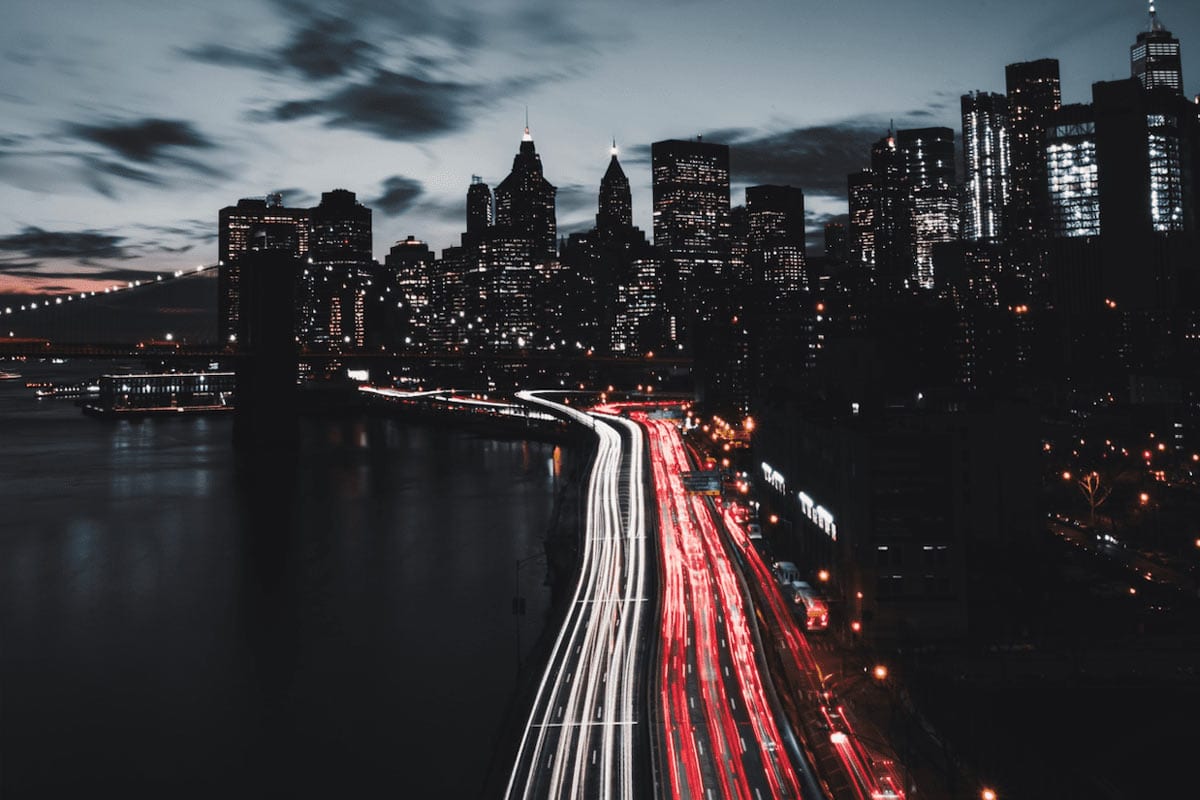 Stream events and other data quickly, reliably and securely, with a PubSub+ enabled event mesh. 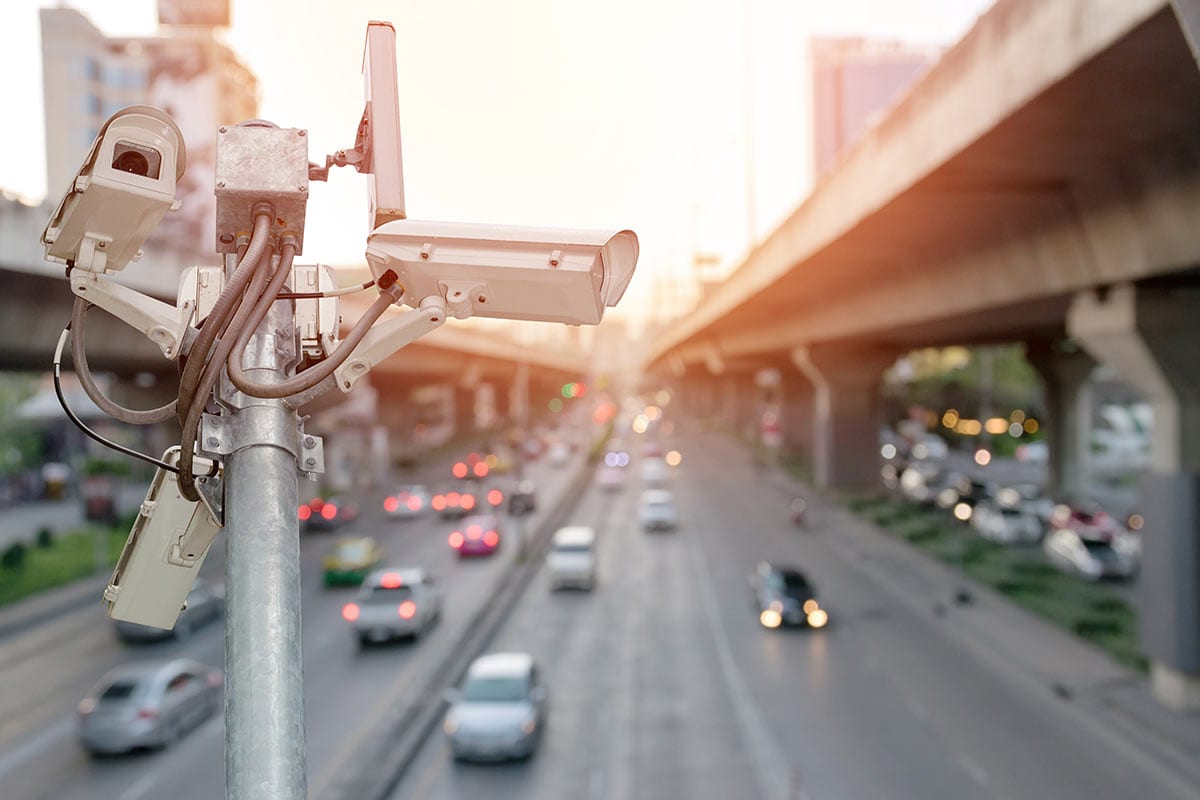 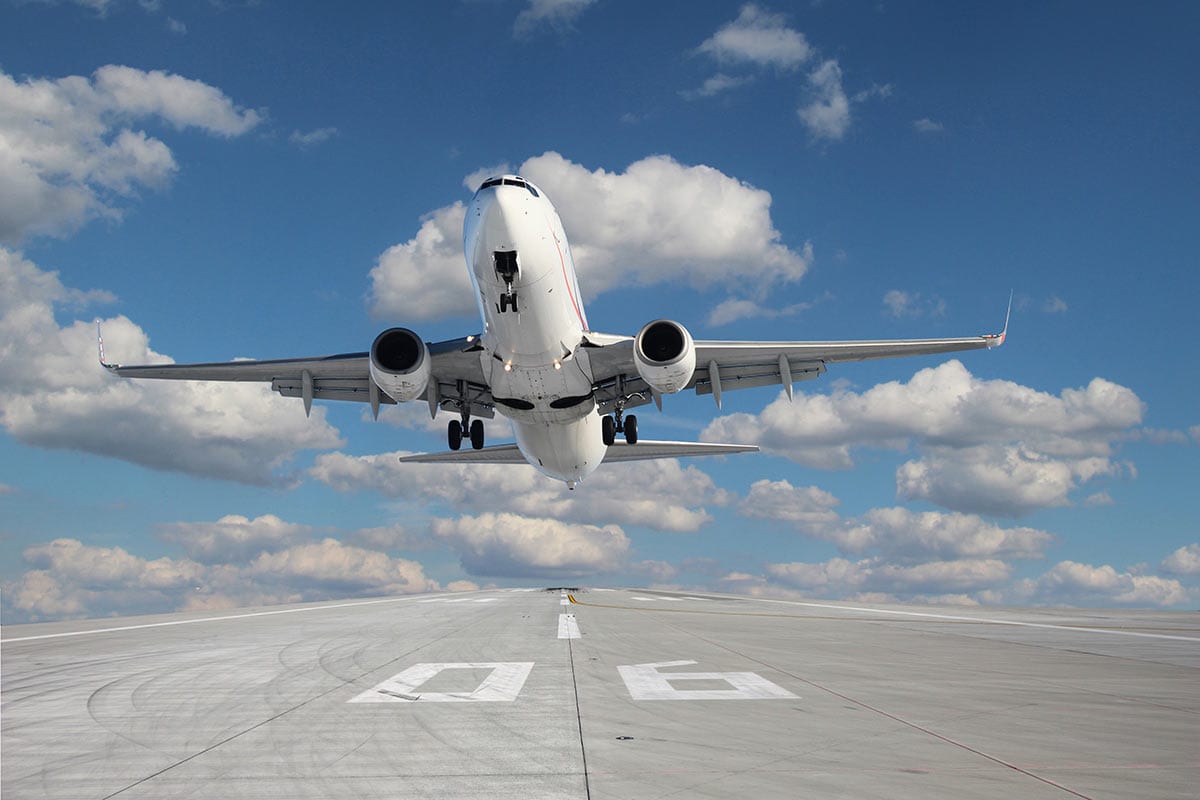 Ensure enterprise-grade performance across environments and geographies, no matter the demands of scale and load. 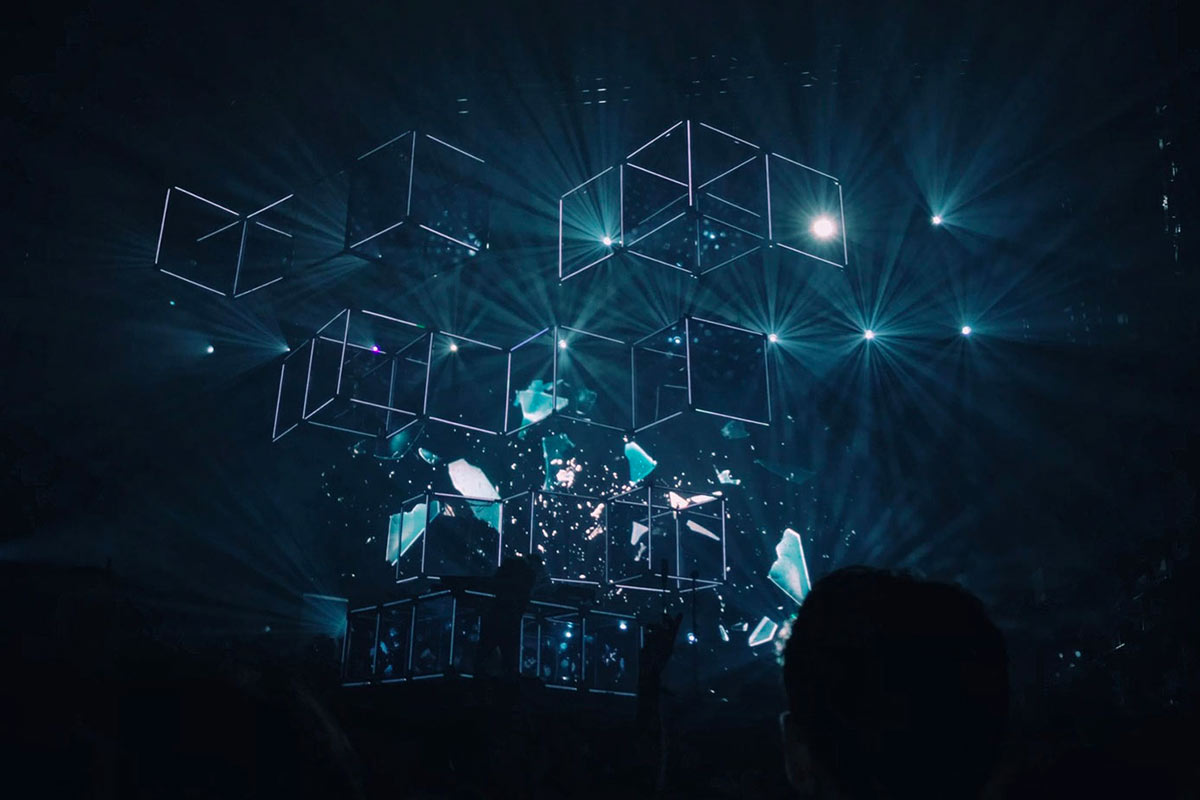 Discover the benefits of having a single place to design, create, discover, share, secure and manage all events within your ecosystem