There is more detail on Apache Kafka’s approach to efficiency and their design choices in the Apache Kafka design documents. Below is a summary of the Apache Kafka architecture sufficient to explain how these decisions may be appropriate for high volume log aggregation but not for most other messaging use cases.

How does Apache Kafka achieve its high performance?

Two significant and novel aspects of Apache Kafka’s design are both its strength for log aggregation and its weakness for general purpose messaging use cases:

With Apache Kafka, messages from publishers are appended sequentially to a log file by the Apache Kafka broker based on the topic + partition of the message – messages are not queued to consumers based on their subscriptions.

Consumers of a particular topic+partition read from this set of log files by asking the broker to play out the next bytes from a given position in the log. Each consumer is responsible for tailing log files for the partitions it is receiving and managing its own state so the broker need not manage this. The impacts are listed below:

The next efficiency is using the Linux sendfile() system call, or transferTo() in Java to send stored messages to the consumers – the efficient “tailing” of the log file.

Most messaging brokers selectively read messages from disk (when needed) into user space and then send them out via a TCP connection to the consumer. The path of a message is depicted in the following diagram:

The path involves (1) reading messages from disk into the file system (2) copying data from the filesystem page cache into the application’s user space buffer (3) writing the message from user space into a TCP socket in the kernel (4) the kernel transferring the user data with TCP/IP headers to the NIC for transmission out the network. This path requires up to 4 data copies. This is the worst-case path.

Message brokers can do various things to optimize this path and reduce issues of data copies and context switching:

With Apache Kafka, the best case scenario data path with sendfile() or transferTo() looks like this: 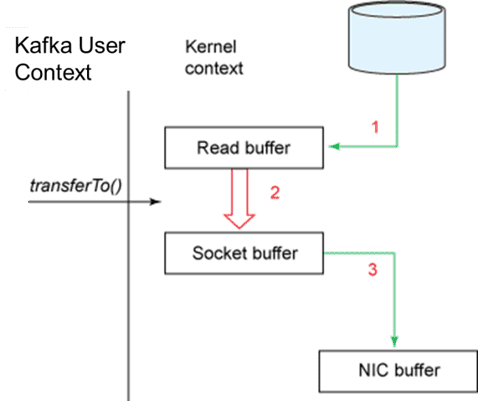 The key reason for developing transferTo(), is for web servers to efficiently send static content to web browsers: move the file as is directly from disk to a TCP socket.

With transferTo(), there is minimal data copying and minimal system calls – it is very efficient. However it also means that the Apache Kafka broker is not in the data path, so it cannot add value since messages sent to consumers must be in exactly the same format as they were sent by the publisher. If Apache Kafka needs to do anything to the stored data stream before sending it to a consumer, then it loses all of the performance advantage it gets from transferTo() and adds the inefficiencies of Scala/JVM object management to its datapath. For example:

The Solace PubSub+ datapath architecture varies somewhat between the hardware appliance and the software version, and between persistent and non-persistent messaging. PubSub+ appliances have purpose-built cards that use FPGAs and Network Processors for high performance data movement, message and state storage. PubSub+ software uses the CPU, network and storage of its local host or attached storage as configured.

In all cases, messages arrive from a publisher, potentially with different topics, they are matched against consumer subscriptions, which may include wildcards, they are either enqueued onto a persistent queue or queued in RAM to a consumer’s connection or onto multiple queues of each type depending on whether the consumer’s subscription is a durable subscription or not. The ability to mix durable and non-durable consumers is very useful for many applications (e.g. monitoring or desktop apps using non-durable, server or database apps using durable subscriptions). Inter-message router messaging occurs in the same way: messages are enqueued to a connection or a persistent queue toward the remote message router and sent only once regardless of the number of consumers on the remote message router and without any external components.

For non-durable subscriptions, messages and consumer state are maintained in RAM within the PubSub+ message broker. For the appliance, the message never leaves the Network Acceleration Blade (NAB) and since the NAB has no operating system, the payload is never copied. It is stored in a buffer upon receipt from the hardware, referenced by queue entries in RAM for each consumer connection, then transferred via Direct Memory Access (DMA) over TCP to the consumer. If TLS encryption or streaming compression is required, the original message buffer is fed into on-chip hardware to encrypt or compress the message (with several other messages batched together) and this output is transferred via DMA over TCP to the consumer.

For durable subscriptions, both messages and consumer state are maintained in persistent storage by the Solace message router. In the software version of PubSub+, messages and delivery state are stored to disk on multiple software brokers for resiliency. Multi-threaded processing, batching of messages and state and journaling to disk are among the techniques used to maximize message storage performance. To deliver messages to consumers, the message could be retrieved from the message broker’s RAM cache, or the filesystem cache, or otherwise read from disk.

In the PubSub+ appliance, we use a specially-designed hardware card called the Assured Delivery Blade (ADB) to perform persistent storage of messages and state as well as propagation to the mate appliance without going over Ethernet. The ADB provides byte-level addressability (vs filesystem page sizes) and can transfer data at RAM speeds vs disk and filesystem speeds. This ensures extremely high rates and low consistent latency while also ensuring zero message loss. Watch this video for more information on the persistent messaging architecture of Solace appliances.

Solace PubSub+ offers efficient per-destination queuing for significant operational advantages and personalizes message delivery to meet the needs of each consumer. Some of the key performance advantages of Apache Kafka, namely how consumer state is managed and how messages are delivered to consumers, either produce negative trade-offs for messaging features and operational visibility or cannot be used in many cases, which then negates the performance advantage that made Apache Kafka attractive in the first place.