It’s a new year, which means many corporate departments, including IT, have lots of new money to tackle their 2013 priorities. But does it really?

In truth, corporate IT budgets work a lot like your household budget. By the time you pay for your mortgage, cell phone, cable and utility bills, and lessons for your son or daughter to learn an instrument against their will, you have just a fraction left to splurge on that new car, fun vacation, remodel, or nice dinners out. It’s the same in IT, keeping existing systems running chews up most of your budget, leaving little for innovation. In 2011, IDC estimated that an average of 70% of IT budgets are spent keeping current systems running, with only 30% available for new projects. Just like your own budget, the only way to increase the innovation budget (discretionary income) is to reduce what you’re paying for your fixed expenses. 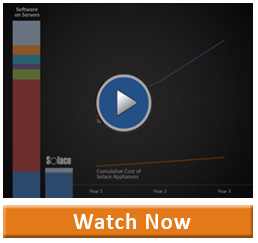 We’ve recently put together this short video that illustrates how Solace can reduce the cost of your middleware layer to free up money you can use to tackle more of the projects on your wish list. The video explains how Solace infrastructure can save you as much as 80% compared to the same capacity implemented as software middleware running on servers.

It’s worth the 4 minutes if you want the details, but here’s the summary of Solace appliances vs the commercial software you likely run today: 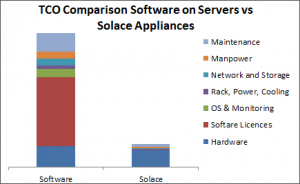 So how does that impact your overall budget? First let’s break down the 70% that IDC estimates is spent maintaining and meeting the needs of existing systems. If 10% of that 70% goes toward middleware (software, hardware, operations, support, etc.) that means you’re spending 7% of your total IT budget on messaging. 80% of that 7% is 5.6% of your total IT budget, now freed up to fund innovation and new projects. That increases the amount of money available for new projects from 30% to 35.6% — an increase of 18.6%.

Not too shabby. Depending on the size of your company, that’s probably millions of dollars more to improve your company’s competitiveness in the marketplace. But we’re not done yet.

Doing More with the Innovation Budget

Chances are your new projects will also need messaging to distribute data between applications. The same economics apply for saving money on new project spend, meaning less of that budget is spend on middleware.

In the Solace scenario, 35.6% of the budget is available for new projects, and we’ll assume the same 80% savings on the 10% that would have been spent on middleware. That means just 0.7% needs to be spent on new project middleware, boosting the money available for other innovation to 34.9% of your total IT budget, up from 27% with software.

Adding up the Savings

So a serious side effect of using Solace to boost throughput, simplify operations and reduce your datacenter footprint is increasing the amount of budget you have to spend on application innovation by (in this example) 29.2%. And once you’ve made the switch, you see those savings year after year. Going back to your personal budget, think about what 29.2% more discretionary income would do for your next vacation or vehicle purchase?

Of course not every company saves 80% with Solace – for some it may be only 60% and for others it can be 90% or more. In working with our customers we’ve developed some tools and techniques that can help you estimate the results you can expect to achieve given your own systems and situation. Your Solace account team would be happy to help with that. In any case, saving money on middleware is clearly a great way to stretch your IT budget and reach more of your innovation goals in 2013 and beyond.